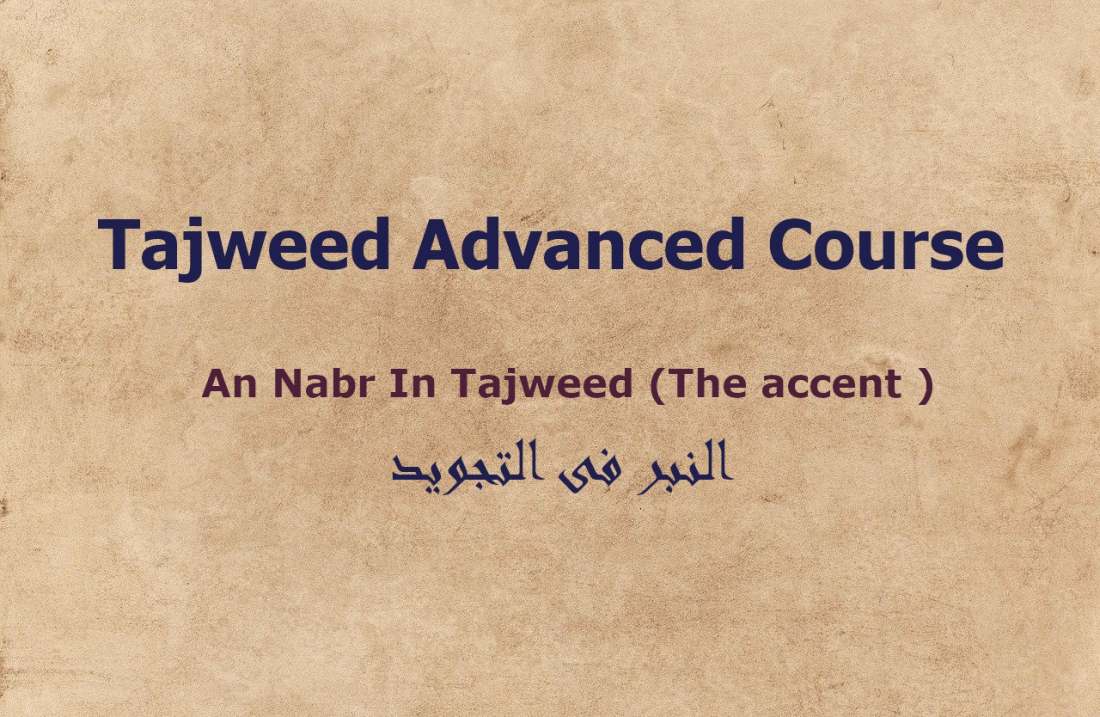 It is defined ( Pressure on a part or a specific letter of the word, so that its sound is a little louder than that of the letter next to it .
The accent varies from language to language, and from dialect to dialect.
In the Glorious Qur’an the Nabr is noted.

There are five different issues .

1-When stopping on a word that that has a shaddah on the last letter.

The last letter of the word has a shaddah. We know that a shaddah on a letter ( indicates that the letter is divided in to two letters as far as formation of the letters goes.

When stopping on a word like this, we stop with one saakin letter, meaning this letter is formed by collision of the two articulating bodies. It is then as if one letter has been dropped from the reading.

2-This case occurs when pronouncing a ( و ) waw that has shaddah and the letter before has dammah or fathah .

Examples:   أَوَّابٌ
-This case occurs when pronouncing a ( ي) yaa that has a shaddah and the letter before has a kasrah or fat-hah
Examples :  وَجَاءَتْ سَيَّارَةٌ

3-This occurs when changing over from a madd letter to the first letter of a shaddah.

The saakin letter occurs with collision and the mouth was busy emitting the lengthened letter, so then it is necessary at the change over from the madd to the saakin letter that occurs after it, putting an accent in our recital to facilitate this change over.

The saakin letter then makes its presence known quite clearly. If the collision is weak the letter is then pronounced with a weak sound to such a degree that it may not even be heard.
Examples :     الضَّآلِّينَ– ،دَآبَّةٍ – صَوَآفّ

4-This occurs when stopping by sukoon on a word that has a hamzah as the last letter preceded by a madd letter or leen letter.

The reason for here is so that the hamzah is not lost after the mouth was busy emitting the madd or leen letter .

5-When words of past tense verbs in the double form of the verb (which is an alif at the end of the word) read in continuation followed by a letter has sukoon.

Nabr(accent) is needed so the meaning of the verse is not confused.
-Nabr(accent) is an indication that there is an alif indicating a double present, but it was dropped in pronunciation due to the Arabic rule forbidding two saakin letters next to each other to be recited together.

Without Nabr the listener may think the verb is male singular instead of male double.

The exceptions to the Nabr :

A-in case of stopping on noon and meem with shaddah on them , these two letters with a shaddah have the most complete ghunnah .

The listener knows that there are two letters when he listens the long ghunnah .
Examples :  ( فَامْتَحِنُوهُنَّ ).